Sutton’s Tories are “the new Luddites”, opposing new technology and innovation that will save Sutton residents millions of pounds. This was the charge made by Councillor Richard Clifton at the Sutton Council meeting on 7 March.

The Tories oppose a plan to close four offices the Council does not need, a reduction in office space achieved by moving staff to a more efficient way of working that involves “hot desking” and the use of new technology.

Councillor Clifton – who works for an organisation that that made this move and himself “hot desks” – claims that the new system of office organisation saves millions of pounds as it reduces the need for office space, enables you to close unwanted office buildings, and is a more efficient way of working. “Hot desking” involves using new technology (remote access email, mobile phones, Blackberries etc) so that people can work remotely, from home or while “out and about” on Council business, part of the time. They do not have their own desk in the office but use any desk that is free on the days they need to go to the office.

This innovation, which many businesses have implemented to cut costs, will enable the Council to close offices and save money. Some up-front costs are involved to invest in the technology and re-organise the office so people can “hot desk”. But Councillor Clifton argues that in the long run it saves millions of pounds, from reduced need for buildings and because it is a more efficient way of working.

An “Outline Business Case” showed a minimum saving of at least a quarter of a million pounds per year, but Councillor Clifton told the Council meeting that his own experience of more flexible ways of working suggests the savings are under-estimated and there are huge savings to be made in the long term.

Underlying this dispute is a more fundamental issue about social change in Britain. Councillor Clifton pointed out that new technology that enables people to work remotely is changing the way we work. The traditional model of office work, where all the work is done between 9 and 5 in a building that people commute for hours to reach, is disappearing. This is due to a combination of new technology and changing social attitudes as people seek the efficiencies and flexibility in work patterns that the new technology makes possible.

“The Tories in Sutton are totally out of touch with the realities of modern industrial organisation,” 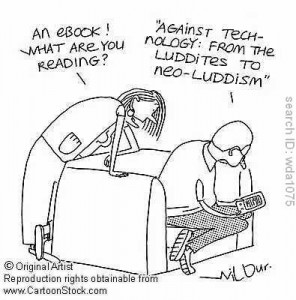 said Councillor Clifton. “They would shackle us to a disappearing model of the organisation of work that would force us to keep open buildings we do not need, reduce staff efficiency, and cost us a packet of money. They are the new Luddites.”

[NOTE: the Conservative Councillors opposed further work on the project, even though the business case showed, at this point, savings. Later work suggested uncertainty about the figures and, in accordance with our commitment to evidence-based policies, the project was ultimately dropped. ]