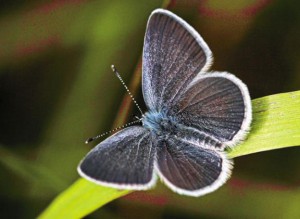 Residents are being urged to use their green-fingered skills to help save a tiny endangered butterfly.

The Small Blue is one of the UK’s rarest butterflies and in London is only established in a few locations, including in an area of Sutton.

As its name suggests, it is Britain’s smallest resident butterfly with a wing span that can be as little as 16mm. But numbers have plummeted in recent years due to the loss of chalk grassland habitats.

Now householders in Sutton South are being encouraged to save the Small Blue by growing kidney vetch, one of the main plants on which the butterflies feed and breed.

Cllr Heather Honour, one of the local ward councillors on Sutton Council, said: “We want local people to get involved and help save this beautiful butterfly. They can grow kidney vetch in their gardens or allotments, and we hope local landlords and businesses will also plant it on their land.

“The response from residents so far has been excellent, with a large number of people, children from the local primary school and several local organisations saying they want to help. Together we can help the Small Blue to thrive.”

The call to help protect the butterfly came as plans were announced to build
a small climbing frame for young children in the Devonshire Avenue Local Nature Area.

Environmental campaigners feared the climbing frame could pose a risk to the Small Blue, whose habitat is in the area.

Cllr Honour said: “There are currently no playgrounds anywhere else in the ward, which is an area where 50 per cent of homes do not have a back garden. Hopefully this is a solution which will help both the butterflies and our young people to flourish.”

Hendryk Jurk, biodiversity manager at Sutton Council, said: “Kidney vetch is a reasonably easy plant to grow and can be cultivated in people’s back gardens, though it does need to be properly maintained.”

Residents will be able to learn more about the butterfly and growing kidney vetch at an event at the site on June 25.