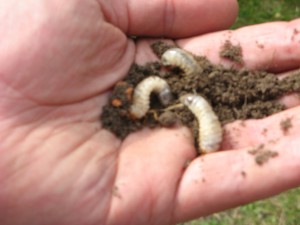 Heather and Richard joined in the first of the kidney vetch plantings which took place today, 10th March, at Sutton Court.  Kidney vetch is the plant needed for the endangered small blue butterfly to survive.  This rare butterfly is found in three locations in Sutton, one of which is Devonshire Avenue Nature Area.

Youngsters who took part were delighted to find “white grubs” in the soil.  These are the grubs of the Maybug and they live for three years under the surface, until they become adults. The grubs were of course replaced in the soil once they had been inspected.

Further plantings in Sutton South will take place in Devonshire  Primary School, Christchurch and The Ridgway.  It is hoped to develop a corridor of habitat suitable for the small blue, leading to Warren Park.  Watch this website for further details.