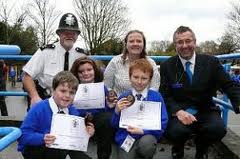 Devonshire Primary School on the up

Children at Devonshire Primary School are getting a “good” education, according to a report just released by Ofsted.

The education watchdog said pupils “flourish socially and academically” at the school, and their attainment has been rising since the school was last inspected in 2008, when it was judged to be “satisfactory”.

The recent inspection, carried out before the half term break in October, said children are well behaved, enjoy lessons and are given opportunities to enjoy lots of activities outside of lessons.

The report states: “Pupils become good young citizens and make a good contribution to the community, participating enthusiastically in local events and willingly taking on responsibility outside lessons.

“The curriculum provides a breadth of exciting learning opportunities that enables pupils to enjoy school.”

The report also praised staff, saying they are enthusiastic and plan lessons that challenge pupils.

Headteacher Martin Kearsey said: “I am absolutely delighted that this report acknowledges the sustained teamwork of everybody at Devonshire. The staff, parents, governors and of course, our wonderfully talented children, fully deserve this recognition.”

Cllr Kirsty Jerome, Executive Member for Education and Schools at Sutton Council, said: “This is a great result for the pupils, staff and parents at Devonshire Primary School who have worked so hard over the last three years. They should be very proud of themselves and this report, which highlights the excellent learning and social opportunities available at the school.”

The result follows the expansion of Devonshire Primary, which saw three new classrooms open in September 2011.

It was one of four to expand as the number of places needed in Sutton continues to rise. Beddington Park, Dorchester and Muschamp primaries also expanded this year, and another five – All Saints Benhilton Church of England Primary, All Saints Carshalton Church of England Primary, Brookfield Primary, The Federation of St Elphege’s Catholic Infants and Junior and Cheam Common Infants – will be enlarged in time for the next school year.

One thought on “OFSTED “GOOD” FOR LOCAL SCHOOL”