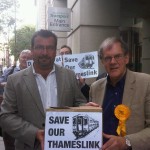 Our campaign to save the Thameslink loop line and ensure trains from Sutton continue to run direct to the north of London took a step forward when Sutton Councillors were involved in a delegation that met Simon Burns, Minister of State for Transport, on 26 November.

During the meeting Mr Burns said that he had told the Department for Transport to review the decision to cut the line at Blackfriars and report back to him early in 2013.

The current plan would see the service – which links Sutton to Luton and St Albans through central and north London, calling at key stops such as the City, Farringdon and St Pancras International – severed at Blackfriars from 2018. But it transpired during the meeting that keeping the Loop Line intact would add only 28 seconds to average train times from Blackfriars, and Mr Burns told the meeting the engineering issues at Blackfriars were not insurmountable.

Richard says “We have not yet won, But I think we can take heart from the fact that the Minister is now well aware of the issue and our strong views. He has agreed that the case must be reviewed. I hope the petition I was involved in presenting at the department for Transport has added to the pressure.”