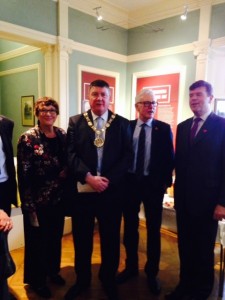 On 26 March the Sutton South Hello! Thursday afternoon group launched a major exhibition of their work at the Council’s historic museum Honeywood, in Carshalton. The launch was well attended and our picture shows Heather Honour with the Mayor of Sutton, Councillor Arthur Hookway, the Care Minister Norman Lamb MP (who launched the Hello! project on 9 May 2012, see below) and local MP Paul Burstow. 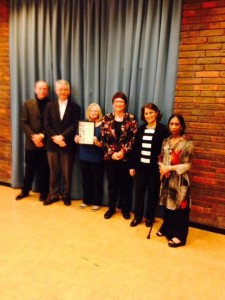 On 24 February 2015 Sutton South Hello! received an award in the Sutton Community Awards annual awards ceremony. This was in the “Community Spirit” category for actions that have brought the community together through community events. The photo shows the Hello! team with the certificate. Left to right the Hello! team who came up to collect the award are Colin Iddles (chair of South Sutton Neighbourhood Association), Gerry Benworth (Skill), Fran Wilson (secretary of the Hello! board), Heather Honour (Chair and Founder), Nedal Ali, Councillor Nali Patel.

South Sutton Hello! is the brainchild of our former Liberal Democrat Councillor Heather Honour, an initiative to combat loneliness and isolation. It is supported by major local charities like AgeUK, Citizens’ Advice Bureau, Sutton Mental Health Foundation, and local residents’ Associations such as the South Sutton Neighbourhood Association and the Highfields Residents’ Association. Heather chairs the Board and has been the driving force behind the project.

It was launched at Christchurch, in Christchurch Park, on 9 May 2012 by the Care Minister, Liberal Democrat MP Norman Lamb, and is intended to be a pilot for similar initiatives elsewhere. There are now similar Hello! clubs elsewhere in Sutton, such as Worcester Park. 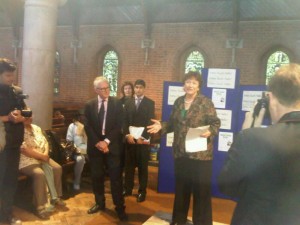 Sutton South Ward was chosen as, on the basis Campaign to End Social Isolation toolkit, it is a ward where the risk of social isolation is particularly high:

–         the proportion over 85 is double the Sutton and national average

–         almost half of all households are single person households

–         but a quarter of residents in the Ward say they regularly volunteer in some capacity, so there is a high level of community activism.

The project has drawn together a listing of the various community initiatives in Sutton South, particularly those run by the churches and AgeUK. It has produced newsletters. There are a number of specific activities it has promoted, in particular the Wednesday “Hello Club” at Christchurch and a Thursday club on craft activities. The project has been aided in setting up these activities by SCILL (Sutton Centre for Independent Living and Learning) and AgeUK

AgeUK has assisted with the organisation of chair based exercises. Councillor Nali Patel often attends and forms a link with the Sutton and Surrey Senior Citizens Club, which meets at the Thomas Wall Centre and is in particular a friendship club for Asians living in Sutton. Other activities in the Ward include the “Second Saturday” social club for older people at the Friends’ Meeting House on the second Saturday of each month.

AgeUK say there has been a 106% increase in callers from our Ward to its Information and Advice service since the project started promoting it. The project is seeking volunteers, particularly as befrienders. These are organised by the Sutton Centre for Independent Living and Learning (Skill). There is a phone number 0208 770 4065, or email information@scill.org.uk.