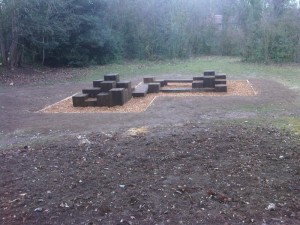 On 15 July Sutton Council debated our on-going commitment to the sustainability agenda and Sutton’s desire to be London’s most sustainable suburb. Sutton is ranked the highest outer London Borough in having the lowest CO2 emissions.

We represent Sutton South Ward, which has only one open space, the Devonshire Avenue Nature Area, an oasis of open space in an area dominated by small blocks of flats, where a study showed half the children live in properties without a garden. We think it commendable that Sutton Council has ensured that this site remains a nature reserve. But a few years ago that meant leaving it as jungle. It was little used, except for anti-social happenings behind the brick walls that still occupied part of the site. Today it remains a nature area, aiding the survival of the rare small blue butterfly (a talisman of Sutton South Ward), but it has benches, paths and a nature trail. We wanted to take the opportunity the motion afforded to pay tribute to Sutton Nature Conservation Volunteers, who maintain the site, and to those who distribute the funds to aid community projects provided by the landfill operator Viridor, whose funding, in 2012, paid for the renovation of the site.