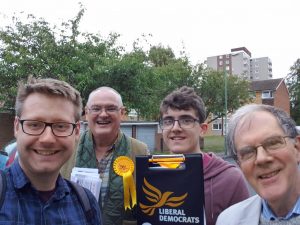 Richard and team canvassing during the Belmont by-election

The Liberal Democrats achieved a swing of 12% to the LibDems from the Tories in the by-election in Belmont Ward. The by-election was caused by the resignation – still unexplained – of one of the Tory Councillors who had stood for election as recently as last May. The Ward is the safest Tory seat in the borough so a shock LibDem victory was never on the cards, but LibDem Councillors take great satisfaction in the movement of opinion towards the LibDems.