When we were first elected in May 2010, one of our first pieces of casework concerned residents in Copse Hill who pointed out to us that two street trees – outside numbers 6 and 22 – had been lost as a result of road traffic accidents. In each case a car had collided with the tree and this had led to the tree being lost. One could see the ugly patch of brown earth left in the grass verge, where the tree had once been. Further investigation revealed that there had been a similar incident in Effingham Close leading to the loss of a tree.

Councillor Clifton persuaded Sutton’s chief arborculturalist, Ben Morris, to visit Copse Hill with him. It has taken a little while but in January new trees were planted to replace those lost in Copse Hill, in the exact same places as the trees that were lost, while two new trees have been planted outside 18 and 34 Efingham Close.

Councillor Clifton has appealed to residents of the roads to ensure the young trees are watered in dry weather.

While assisting residents in Copse Hill, our attention was drawn to the potential problem of the flooding of the road in periods of very heavy rain, as the water flows down Effingham Close to the bottom of the hill. After discussion with engineers in the Highways Department, action was taken to install a new drain gully at the foot of the hill. We hope this has resolved the problem of the flow of water down the hill. There remains a more minor problem with the puddles outside numbers 2 to 10 Copse Hill. Gerry McLaughlin of the Highways Department is shown here marking out changes to the gulleys. There will be a programme of cleaning out the soakaways over the summer and it is hoped that this problem is resolved. 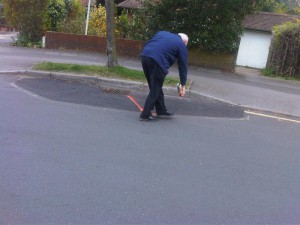 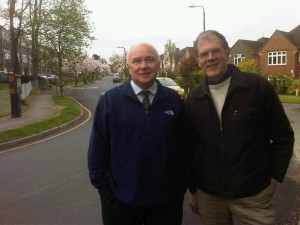