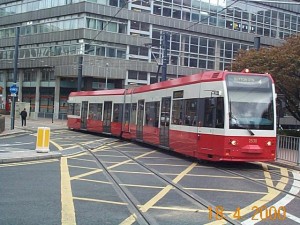 The proposed route consulted on would involve a branch to the current Tramlink route after it has left Wimbledon and got as far as Morden Road. The branch to Sutton would leave the current Wimbledon to West Croydon Tramlink route at that point, proceed via St. Helier Avenue to the Rosehill roundabout, then to Angel Hill and on to Sutton, where it will go round the gyratory. There will be a loop from the Rosehill roundabout to St. Helier hospital.

Full details can be found at  www.suttonmertontramlink.co.uk or by clicking on this link.

If agreed and built, phase 1 may be followed by phase 2, an extension to the re-developed Sutton hospital site in Belmont. This is as yet far into the future. We remain hopeful that funding will be found for phase 1. 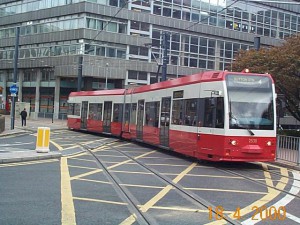 Sutton Council’s campaign to bring trams to the Borough is celebrating an early success.

Plans to extend the existing Tramlink network to Sutton have been included in the Mayor’s new vision for London document, “2020 Vision – The Greatest City on Earth”, published last week.  It outlines some of the challenges facing the capital, including housing, employment and transport.

Sutton Council, business and residents support the tram extension, which will improve transport links in and out of, and across, Sutton. The project will also create and sustain new jobs, drive economic growth, ease traffic congestion and reduce CO2 emissions.

We understand the original draft of the Mayor’s vision document made no mention of bringing the tram to Sutton, but our Tramlink campaign, still in its infancy, has already yielded a result. The Mayor of London is asking us to demonstrate how this investment will be justified by the improvements it can bring in terms of jobs, growth, and housing.

Sutton is already one step ahead.  We have commissioned research which demonstrates that extending Tramlink to Sutton will create 10,000 jobs, bring forward sites for residential development, and support and boost the economy.

We know that extending Tramlink will ensure Sutton continues to prosper into the future. The Borough of Sutton has had an ambition to bring Tramlink to Sutton since 2003 when it was included in the Unitary Development Plan. The Borough has successfully worked with Transport for London to examine the feasibility of bringing trams to central Sutton, connecting it to St Helier Hospital, Morden Tube Station and Wimbledon. At some point a spur through our Ward, Sutton South, would connect to the Marsden hospital. This feasibility work is ongoing, and Sutton’s Tramlink campaign seeks to ensure the Mayor will continue to fund this work in Transport for London’s future budgets.

Sutton Council has made public detailed plans for an extension of London Tramlink to the town. The plans were made public at a meeting on Thursday 23 May attended by Councillors, local business leaders and the Under Secretary of State for Transport, Norman Baker MP, who was at the launch event to give the project his backing. .

The planned route would run from the existing Tramlink Croydon-Wimbledon line at Merton through Rosehill and St Helier, Angel Hill, and Sutton High Street to a terminal at Sutton station. A later second phase would link the town centre to the Royal Marsden Hospital.

The tram connection would cut local journey times and costs, reduce pollution on the streets of Sutton and help regenerate areas such as the St Helier Estate by encouraging investment, improving access and widening the job market in the areas concerned.

The extension through our Ward to the Marsden hospital would be of importance as it is expected that the development of a research centre at the Marsden will create many local jobs.

The Tramlink is a major plank in the “Opprtunity Sutton” programme, which Richard is closely involved with as vice-chair of the Housing, Economy and Business Committee.