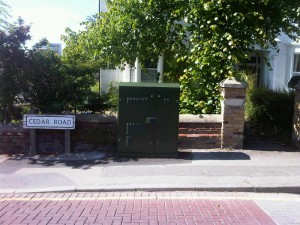 A street meeting attended by local residents was held on the morning of 9 June at the box, pictured above, erected by BT/Openreach outside 39 Cedar Road in South Sutton Ward. While we need these boxes for Broadband, local people have expressed strong feelings about the way this box is erected right outside the resident’s front window.

A post on this website (see archive for May 2011) describes the general problem related to these boxes, but we are aware that BT/Openreach can, due to an Act of Parliament, ignore planning law in erecting the boxes. Sutton Council wrote to them last November with objections to the proposal to erect this box in Cedar Road as it contravenes Department for Transport guidance. BT seemingly ignored the Council’s objection, which they can legally do, though they have maintained that in a discussion with a member of staff of the Council the objection was later withdrawn. These objections related only to comformity with planning guidance and not the wider problem of the impact of the box on the amenity of local residents. Within a 100 yard radius of the box there are four old-style green boxes in appropriate positions that do not cause any problem to residents. Local residents felt that the box could have been erected alongside one of those.

The street meeting was attended by local residents, including the occupant of 39 Cedar Road, Councillor Clifton and Councillor Colin Hall, who deals with these issues on the Executive of Sutton Council and has been in touch with other Councils that have similar problems across London. Jack Hamilton, former chair of Sutton South Neighbourhood Association and a local resident, also attended.

Two people from BT/Openreach, Giles Ellerton and Adrian Paice, came to the meeting. The argument they put to the local residents was an entirely technical argument that technical problems, related to avoiding digging up pavements where there are high-voltage cables and required distances between cabinets, prevented them from putting the cabinet in any other position.

Local residents were suspicious of the argument put, in that it is a technical argument by the people who have the technical expertise, and consequently no-one present had the expertise necessary to assess its validity. There was also a feeling that if the occupant had had hard standing for a car in front of her house, as the house next door does, this would have prevented BT/Openreach from erecting a cabinet in that position – in which case they would undoubtedly have found some other solution, not just given up.

In email exchanges after the meeting an offer has been made to the resident of 39 Cedar Road of compensation for particular aspects of the inconvenience she has suffered. However this is very limited and we understand she is not likely to accept it.

Councillor Clifton, whose pressure led to the meeting being set up, comments as follows:

“This meeting has not resolved the problem. I can take some positives from it.

First, BT/Openreach have, under pressure,  now met local residents and explained in much greater detail than we have had before why the box was erected where it is. This makes it possible to seek more information and a technical opinion on whether their argument stands up, something we will do.

Second, alerted by the problem here, I will ask Sutton Council officials to advise me as a local Councillor of the locations of any further boxes to be erected in Sutton South Ward so I can look at the proposed locations. BT/Openreach seem to have been usually quite responsible in assessing locations, which makes it particularly disappointing that they cannot resolve the Cedar Road problem – a particular, and severe, problem.

Finally, the meeting has led to a very limited offer of compensation. That is, however, a matter for those involved to discuss.” 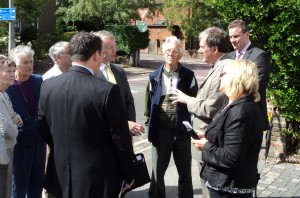 [ A tense moment during the road meeting, at which there was a frank and open exchange of views between local residents and BT/Openreach staff. Councillor Clifton, on the right, puts a point to Giles Ellerton of BT/Openreach. ]