An issue raised with us from time to time by residents is that cars travel too fast along the quiet back roads in some parts of our Ward.

Consequently the police have been working with the community on an inititive known as “Speedwatch”. 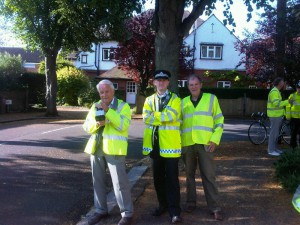 On the morning of 6 June a group from the Sutton South police consultative panel (visit the page on this site called “Sutton Police” for details of panel meetings) were stationed, early in the morning, in The Ridgway in South Sutton. Using a complex piece of technology, they recorded the speed of cars coming down the road, so that the police could stop and warn anyone speeding.

In the picture you can see representatives of the panel and the police with Councillor Richard Clifton, holding the “gun” that is pointed at cars and records their speed. This was the first in a programme of such speed recording activities.

We support initiatives to reduce the problem of speeding cars in our Ward.