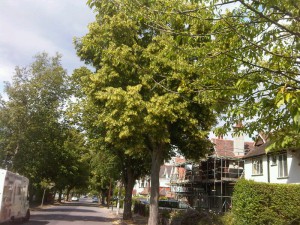 Sutton is famous for its avenues of street trees, and our Ward has many fine examples.

There are over 21 00 street trees in Sutton and their maintenance is sometimes a headache. While we all love the trees, they drop leaves and sap, block light and disturb pavements and front gardens with their roots. A balance has to be struck in keeping their height down, since heavy pollarding of lime trees (for example) leads to them developing many more branches that grow back quickly with larger leaves. Tree pruning policy is governed by a British Standard, and needs to take account of the shaping of the tree. Changes to the Standard in the 1980’s led to some changes in tree pruning policy involving less severe pruning.

In 2011 an exercise was carried out to deal with basal growth and low level branches. A more severe pruning programme occurs on a four yearly basis. Richard and Heather were able to get the programme changed so that the pruning programme began in the Ward in November 2011. It is due to conclude by February 2012. It has involved identifying any trees that are diseased and 16 have been taken out. The locations are noted and replacement trees will be provided in due course, but there is a waiting list. The rest are subject to the pruning programme.

Before the programme began Richard met Ben Morris, the Council’s Chief arborculturalist, in Sutton South Ward, to discuss the programme. They called on a number of residents who have particular issues with street trees.

Richard comments “We all love the trees and Sutton is rightly regarded as a green and pleasant Borough. I was pleased we were able to get the pruning programme brought forward. Inevitably the decisions taken by the arborculturalists leave some people complaining that trees near them should be pruned harder or less hard, and in a few locations trees that twere declining or diseased have been lost. But overall this is a programme to maintain the trees that are such an attractive aspect of South Sutton Ward.” 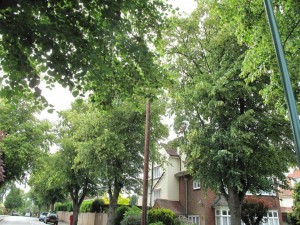 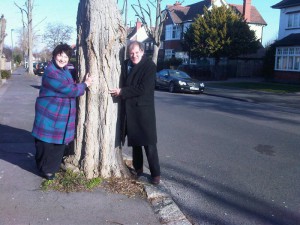 We appreciate the trees in The Ridgway, which have been severely lopped.