MANY RESIDENTS OF SUTTON SOUTH WARD COMMUTE INTO CENTRAL LONDON EVERY DAY TO WORK.

SERVICES WILL BE CUT AND JOURNEYS ON OTHER ROUTES MORE CROWDED UNLESS WE CAN STOP THE PROPOSALS TO AXE SERVICES TO FARRINGDON, St PANCRAS AND BEYOND. 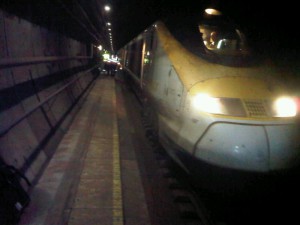 After Richard made a stirring speech to Sutton Council about transport services on 16 July, Richard and Heather joined rail campaigners in Sutton for a day of action on 18 July in a bid to save our vital link to The City, St. Pancras, North London and stations to Luton.

Under current plans Thameslink Loop Line trains which link Sutton to St. Albans and Luton through central and north London will terminate at Blackfriars station from 2018.

But Richard, Heather and other campaigners – including our two LibDem MPs and the Leader of the Council Ruth Dombey – boarded trains on the morning of 18 July to travel to Blackfriars as part of our day of action.

Richard – who was interviewed on BBC Radio London that morning as part of the campaign – summarised our case in a speech he made to Sutton Council on 16 July. He said:

“We all know the importance to Sutton of maintaining a through rail service to north London.

Over the next few years there will be a positive mushrooming of international rail travel from London. If the current plans of Deutschbahn and Eurostar come to fruition, by 2014 it will be possible, on arriving at St Pancras, to have a choice of services to travel from London to Amsterdam.

In addition to the current services to Brussels and Paris there will also be services from London to North Germany. This is a big market in terms of business travel. At present, each day, about 30 planes fly from London’s airports to destinations in north Germany, carrying about the same number of people as could be carried by just a few trains, using the Velaro D trains that are being built to provide rolling stock for these new services from London, by the train manufacturer Siemens at its Dusseldorf factory, which in fact I visited recently.

Aside from the potential importance of these international links to the residents of Sutton, there are international companies that have significant centres of their enterprises in Sutton – Sutton, a thriving London suburb, offering office space much cheaper than that found in the centre of London, less than half an hour by train from the centre, with a pleasant ambience and environment, and a location from which – importantly – you can reach the centre of Brussels in just two train journeys, one taking about 40 minutes and one about 2 hours. And the centre of Paris in just 15 minutes more. And soon – Amsterdam, north Germany.

Now, these are transport links that it is vital for Sutton to maintain, for the sake of our residents but also to maintain our attractiveness as a centre for business development. When I look at the data on economic activity that comes regularly to the new Housing, Economy and Business committee, some clear conclusions stand out. It is clear that Sutton is doing relatively well in terms of surviving the recession and maintaining one of the highest rates of economic activity on the part of its residents of any part of London. But we need to continue to attract new businesses.

The Tramlink extension is perhaps equally important, particularly in relation to the north Sutton site, which is an attractive site, and on which the Housing, Economy and Business committee now has a task group working on the planning brief. Our current plans include scope for a Tramlink stop at the site, something that will greatly enhance its appeal, and we see this development as an important part of our future growth strategy.

So we must keep pressure on TfL to continue work on the feasibility of the Sutton Tramlink proposal, and make clear to the Department for Transport that changes that remove our linoks to north London and in particular to St Pancras, are not acceptable.

The Thameslink service is absolutely vital. Losing it would sever our only direct link to North London and would mean Sutton residents would need to take at least two trains to get to St Pancras. It is quite scandalous that, at a time when we should be improving public transport, there is a serious proposal to cut the link between North and South London.”

We need to act now as the Department for Transport is currently consulting on the new seven-year Thameslink franchise which will run from September next year and incorporate the Southern franchise from 2015.

Ironically, the cross-London Loop Line service which runs through Sutton, Carshalton and Hackbridge stations, was recently reopened at nights and weekends after being split for three and a half years by engineering work. It is all very well reopening it now, but Sutton’s residents need the line to stay open for good.

The new franchise will set service patterns for 2018 and beyond, so it is vital that we act now and do not become a Cinderella area for rail transport.

To give your input into Sutton’s response, email alex.forrest@sutton.gov.uk

Richard and Heather will be submitting their own response.

More detail about the attitude the Council is taking, opposing this threat, is in a further post on this site “Train Links To North London Must Remain” (see archive July 2011). 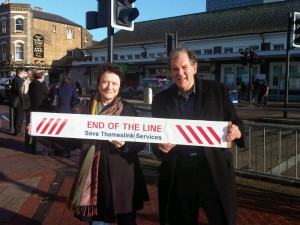 Heather and Richard outside Sutton station

One thought on “THREAT TO SUTTON’S COMMUTER SERVICES: RICHARD AND HEATHER SUPPORT ACTION”