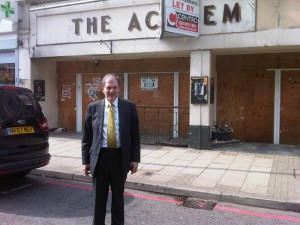 We were recently approached by residents in Worcester Road concerning the licence application to re-open the former “Academy” public house in Grove Road as a nightclub. They were concerned at a likely impact on late night noise problems in the area.

Following discussions with residents, Richard submitted representations on the prevention of public nuisance to Sutton’s Licensing Committee, and spoke at the public hearing held on 28 March.

He pointed out that it would be a matter of concern for premises so close to many residential properties to be offering music, dancing, films and sale of alcohol (for consumption on and off the premises) until 4.30am, seven nights a week, and then – after a break of just a few hours – starting again at 9.00am.  The application, if approved, would lead to an unacceptable degree of public nuisance, particularly due to noise from people coming away from the premises into neighbouring streets in the early hours of the morning.

Although the premises are not in Sutton South Ward, some of the people coming away from the club in the early hours would walk through our Ward. Concerns had been raised by the police about disturbance and noise late at night, drunken people walking home, alcohol-related brawls and anti-social behaviour. The application should be refused.

We are pleased say that the application was refused, the Committee citing in particular problems with noise, community impact and alcohol-related crime.