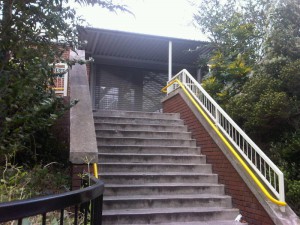 Our long-running campaign to open the side entrance to Sutton station has taken a major step forward, with the acceptance of the Council’s submission to Transport for London of a bid for £740 000 worth of funding under the TfL Major Projects scheme.

The project, known as the Sutton Station Gateway Major Scheme bid, will need to be the subject of further negotiation, so is not finally home and dry, but we are hopeful that it will proceed next year following confirmation from Transport for London that the bid was successful. We have been awarded £740,000 for this scheme in the 2013/14 financial year.

Richard says “We have made this a major campaign since we were elected. Initial setbacks, such as the rejection of a bid by the Mayor under the Outer London Fund Scheme, have not deterred us. If this now goes ahead it will be good news for the residents of Sutton South Ward, particularly  who commute from Sutton station, giving easier access to the station and an improved frontage in The Quadrant.”

Sutton station is the 5th busiest in South London, and the 27th busiest in the whole of Greater London, with almost 6 million passenger movements every year. It is one of 18 stations in London identified by TfL as suffering significant congestion problems.

Benefits of the scheme will include reduced pedestrian journey times between the station and The Quadrant, the station car park and the Langley Park Road area, as well as reduced congestion within the station main entrance and at the barriers.

Opening the side entrance at Sutton Station will cater for the considerable demand for direct access to the station from the Quadrant House office block, which houses Reed Business Information (with approximately 2,000 employees, about one third of whom travel to work by train) and a number of other expanding companies, together with the Tudor Court office block, which houses Synergy UK. The new entrance will also serve the large station car park (which Network Rail wish to expand), and the motorcycle and cycle parking areas, which generate considerable demand for access from that side of the station. There is also direct footpath access between The Quadrant and Langley Park Road and surrounding residential streets, well-used by rail passengers. These station users currently have to walk around the side to the front of the station on a convoluted route and negotiate busy footways, bus stops and the station entrance. Most of these passengers are likely to have season tickets, and opening up the side entrance will significantly reduce their journey times and congestion outside and in the entrance hall of the main station entrance.
While the Council has been lobbying for the opening up of the side entrance since the entrance was created with a retractable shutter ten years ago, the campaign took on new impetus when Richard and Heather were elected in 2010. The entrance is opened up when rail replacement buses are used during engineering work, as the buses stop in The Quadrant. This demonstrates that it is possible to open and use the entrance. Southern has supported the opening in principle, subject to funding being available to provide the barriers etc. Network Rail has also supported the scheme in principle and has assisted with business case work.
We will keep readers advised of further progress in the negotiations that are now underway. At the Council meeting on 14 January Richard sought re-assurance that elements such as lighting in the Quadrant and cycle parking will not be lost.