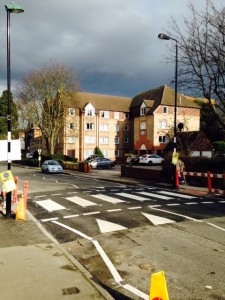 After a long campaign initially led by Richard and former Councillor Heather Honour, more lately by Richard and Trish, the new zebra crossing in Cedar Road is there. This project began some years ago when we obtained funding for a survey of traffic speeds in the Ward which identified Cedar Road and Cavendish Road as speeding hot spots. The new traffic islands in Cavendish Road have reduced speeds. People will doubtless think the Cedar Road zebra crossing is part of the Sutton Gateway project, but in fact it is a separate project.

The Gateway project should be completed in the next month and has smartened up the station area.

The project aims to further develop the area around Sutton station, including by:

– refitted shop fronts, new paving and newly planted trees to improve the look of the area

–  a new crossing in Brighton Road.