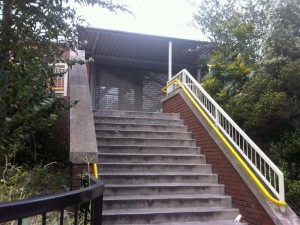 The old side entrance – shuttered and barricaded 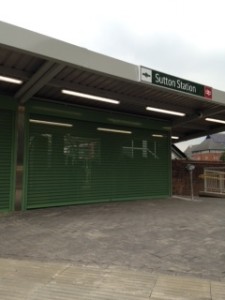 The £1.2 million Sutton Gateway project – largely financed by Transport for London – has come in £8 000 within budget, a remarkable degree of accuracy.

The main success for Sutton South Ward residents, in particular those who commute to central London, is the opening of the side entrance to Sutton station. The side entrance is now open from 6am to 11pm seven days a week. The cycle racks next to the side entrance have been improved and the number of racks doubled.

The project further developed the area around Sutton station with:

– newly planted trees to improve the look of the area

– a re-arrangement of the bus stops to reduce congestion

– general improvements in design and to the “public realm” around the station, with more flowers, more colour and better signage

– new “legible London” signs based on this design, still to be installed. 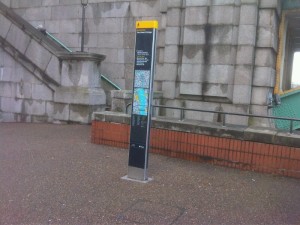 These changes are largely funded by grants the Council has obtained, not local Council tax payers.

The results of the earlier consultation exercise on the Gateway Project indicated general support for the scheme, but we were able to make a number of changes to respond to specific issues raised. In our Ward, a particular concern for the businesses was the need for a loading bay on Regents Parade just south of the station. We successfully lobbied for this to be incorporated into the scheme.

The improvements attributable to the Gateway project are complemented by the installation of the new zebra crossing in Cedar Road, which was not part of the project.