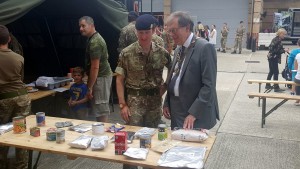 On 20 June Trish and Richard attended the flag raising ceremony, raising the Armed Forces Day flag in Sutton Town Square, to honour our armed services. This marked the start of Armed Forces Week. Richard, as Mayor, led the event.

Richard said “Our Armed Forces are busy working around the world, promoting peace, delivering aid, tackling drug smugglers, tackling people smugglers, providing security, fighting terrorism.   They work in difficult, dangerous and unpleasant conditions away from their families and the luxuries we all take for granted.   They operate in environments where the very basics of security and safety are absent.   They face, daily, a daunting challenge, doing work that is vital to the protection of our society and our way of life. we now watch with pride as the Armed Forces Day flag is raised for those  who are currently serving and those who have served.”

On 25 June Richard visited the army centre in Stonecot Hill (see photo) and observed the work of 151 Logistics Corps. On 20 July he attended a reception given by 151 Logistics Corps at which there was stirring rendition of “Highland Cathedral” (a composition popular with the concert bands Richard plays with) by the Ghurka pipe and drum band. 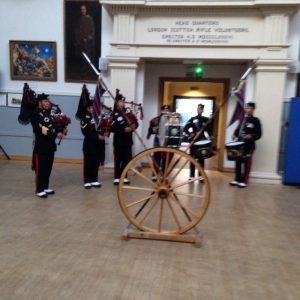