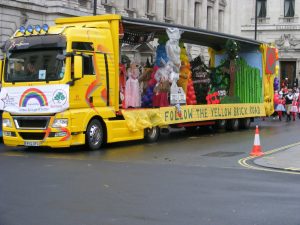 The float entered by the London Borough of Sutton won fourth prize in the 2017 London New Year’s Day Parade, our best result in over a decade and a stunning achievement given the stiff competition from other London Boroughs.

Masterminded by Christine Lindsay of the Gary Mason Drummers and put together by over 60 unpaid volunteers, the float was on the theme of the Wizard of Oz. The theme of the parade was “Lights, Camera, Action” and floats were expected to reflect this theme.
The prize is a trophy – which will be displayed in the Mayor of Sutton’s Parlour – and £7 000 to the Mayor’s Charity Appeal for two worthy charities, Sutton Shopmobility and the Alzheimer’s Society. Richard received the trophy from the Deputy Lieutenant of Greater London, Roger Bramble DL, following the announcement of the results after the parade.
Richard, as Mayor of Sutton, travelled with the Mayoress – his wife Gloria – near the head of the parade on a bus carrying all 32 London Civic Mayors. He commented to the press
“This is a stunning achievement, up against very stiff competition from the other 31 London Boroughs. I am so grateful to the wide range of volunteers and sponsors who made this outstanding entry, a highlight of the parade, possible, and am astonished to find my charity appeal is £7 000 richer as a result.” 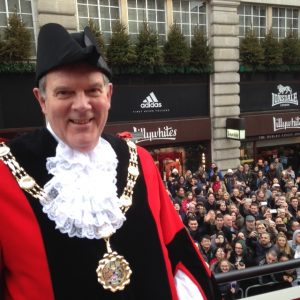 The pictures show the float and the Mayor on the Mayoral Bus.