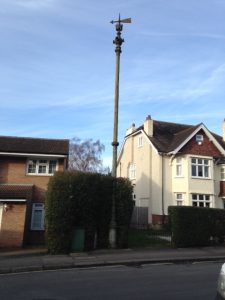 At the Housing, Economy and Business Committee meeting on 13 February the Committee considered a draft of a publication that will list all the “locally listed” buildings in Sutton. Most people are aware that historic buildings might be “listed” to prevent their being inappropriately developed or demolished. This is, however, a national system, and local authorities can prepare lists of local structures that are of significance locally though not grand enough to go on the national list.

There are four such structures in Sutton South Ward.

Perhaps the most unusual of these is the sewer vent pipe, pictured above.