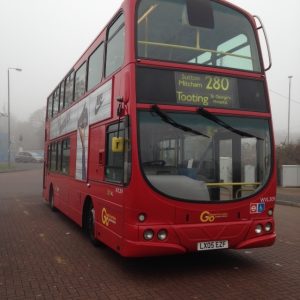 Transport for London is consulting on proposals for a new, direct and fast public transport link  service for Sutton and Merton. This consultation is called the Sutton Link and seeks views on bringing the tram to Sutton, or developing what is called a new Bus Rapid Transport (BRT) route. You can respond to the consultation at

Councillor Whitehead, the Chair of Sutton Council’s transport liaison committee, and Sutton Council officers will be meeting with TfL London Buses in the New Year to discuss how bus services can be tailored to meet future development proposals in the borough. It will also provide an opportunity to raise any issues related to any shortcomings with existing services. A similar meeting has been held in previous years but Councillor Whitehead tells us a more thorough review of outer London services is now promised by TfL.

This is an opportunity to set out views on any changes we would like to see made to services in the area, including changes to frequencies or the duration of services, or route diversions/extensions to provide missing connections.

Officers will consider how this information is presented to TfL. However, the final decision on any such changes rests with TfL and there will be limited resources available.

Local residents in Sutton South Ward have raised with us the following concerns when consulted in the recent past.

Route frequency – although residents have commented that on some routes, such as route 80, frequency and reliability is good, bus 470 is seen as too infrequent, being only about every half hour.

A further difficulty with the 470 is that it does not run on a Sunday so our suggestions for the 470 are to increase the frequency from once every half an hour, run it on Sundays and (see below) extend it to Epsom hospital.

The X26 bus to Heathrow is used by many and the increased frequency of the X26 is welcome, but the buses have difficulty in keeping to the timetable, perhaps because of the length of the route. Some residents say they would not use it if travelling to Heathrow to catch a plane as it is not 100% reliable. There may thus be a case for increasing the frequency further.

Route length – could the 470 go to Epsom hospital rather than Epsom market as there are residents who use it to go to the hospital?

On route 151, the frequency and reliability is generally good but the service could be improved if some rush hour buses turned round at North Cheam, bearing in mind that the 213 duplicates the 151 onwards to Worcester Park.

Timetabling – it is noted that the 80 and 280 buses running northwards along Brighton Road frequently arrive at the same time. Could the timetabling be looked at?

Passenger information – it has been pointed out that the two bus stops in Mulgrave Road close to Sutton station do not include digital displays on bus arrival information. Although there are other ways of getting this information, on your mobile phone, not all passengers have the skill to get this.

A review of the information arrangements was suggested for some routes. On route 164, at some stops the bus is recorded as a minute away or due but it does not turn up for six or seven minutes.

Other matters – There has often been comment on arrangements at Sutton station. A resident suggested that congestion in Mulgrave Roadcould be alleviated by moving the taxi rank. It would be possible to move it to The Quadrant now the side entrance to the station is open, but this would probably be unpopular with the taxi drivers and railway passengers, and was not a proposal pursued under the Sutton Gateway project. A resident also commented that this part of Mulgrave Road has on occasions been briefly flooded during very heavy downpours. I have asked Council engineers to investigate.

A summary of these comments, by bus route, is:

470 – increase the frequency from once every half an hour, run it on Sundays and extend it to Epsom hospital

151 – the service could be improved if some rush hour buses turned round at North Cheam, bearing in mind that the 213 duplicates the 151 onwards to Worcester Park

It should be noted that while this summary is focussed on suggesting improvements, many residents have commented to us in favourable terms on the frequency and reliability of local bus services.

We have put this digest of views forward to officers for consideration. Any decision rests, of course, with Transport for London.