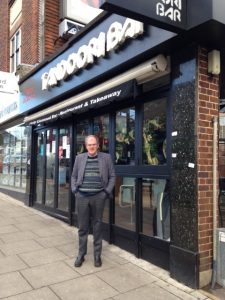 The owner of the Noor Jahan Tandori Bar in Brighton Road has submitted an appeal against the decision of Sutton Council to remove his licence to sell alcoholic drinks.

Sutton Council completed its review of the licence of the Noor Jahan Tandoori Bar, at 10 Station Parade, Sutton, just south of Sutton station on the Brighton Road, earlier this year. The bar is the only bar in Sutton South Ward.

At a hearing of the Licensing Committee on Monday 17 February in the Civic Offices in Sutton, the decision was taken to revoke the bar’s licence. Trish and Richard attended the hearing. Richard told the committee that he did not want to see the bar closed but it needed to be much better managed, as it had been in the past, to ensure there was no nuisance to local residents.

The bar had a Premises Licence to sell food and drink till late at night.

Discussion at the committee related to the four licensing objectives of:

2. Protection of children from harm

The committee was shown video evidence indicating breaches of the licence conditions, with trading outside the permitted hours, smoking in the bar, and noise problems.

The premises are up for sale and it is believed that there is a buyer keen to take over the bar. The buyer would, unless the appeal succeeds, have to apply for a new licence and convince the Licensing Committee that the premises will be better managed in future.

It is understood that the Spagetti Tree restaurant, near the bar, is taking over the vacant unit next to it (also an Italian restaurant until it closed recently). And that the vacant Rift and Co. premises opposite Sutton station will become a Sainsbury’s local.